EFP officers and members of the EuroPerio9 organising committee recently met a wide range of industry representatives to explore exhibition and sponsorship opportunities for the congress and exhibition which will take place in Amsterdam in June 2018.

The meeting, which took place on June 16, involved 26 commercial companies, all possible exhibitors at EuroPerio9 or sponsors of the congress.

They were presented with a 20-page dossier which explains the history of EuroPerio and the plans for the 2018 edition, including a preliminary programme overview. The dossier outlines the various partnership options (diamond, platinum and gold) and the process involved in applying to become a EuroPerio9 sponsor.

Given the huge success of EuroPerio8, held in London in June 2015, there was considerable interest from those who sponsored that event.

The one-day meeting was held at the RAI Amsterdam Convention Centre, which will host EuroPerio9 from June 20 to 23, 2018, so that everyone could get a better understanding of the concept of the event and see the lecture halls, exhibition space, and other areas that will be used.

Gernot Wimmer, EuroPerio9 treasurer, said that the aim of the meeting was to build on the success of the London congress, maintaining at least the same level of exhibitors and sponsors and “working together to continue the EuroPerio success story.”

Florian Fehringer, director of international projects at Mondial, said that industry feedback from EuroPerio8 had been extremely positive.

“The industry was very satisfied with EuroPerio’s development over the years,” he said. “The very large number of participants as well as the high quality of scientific content is appreciated.”

He added that other than some “minor remarks” about logistics there had been no substantial negative feedback in relation to the London congress.

Commenting on the Amsterdam meeting with industry representatives, Michèle Reners, chair of the EuroPerio9 organising committee, said: “We had interesting exchanges and different propositions and suggestions were discussed. We also had a look at all the nice places in Amsterdam where the social events will take place – which is quite difficult as Amsterdam is full of very exciting places.”

Dr Reners added that “organising EuroPerio9 is an amazing team work” and praised the “great professionalism” of Mondial. She said that the industry players played a major role because the exhibition “is the core of the meeting and the integration of sponsor sessions is a ‘must’. Moreover, a solid sponsorship is helping to make EP9 even more attractive.”

Reners explained how the committee had started preparations even before EuroPerio8 in London, holding its first meeting at the RAI in May 2015 to check out the venue’s facilities.

“London was a good example for us and we were particularly attentive to any details, so we could better understand the needs of such an event,” she said. “We have had more meetings since then: to fix the definitive settings of the venue, to choose the logo, to organise the ‘ambassadors’ programme’, and to meet the dental hygienist representatives to involve them in the scientific programme.”

In conclusion, said Reners, “We all are willing to organise a wonderful global event and all the energies are concentrated to achieve our goal.” 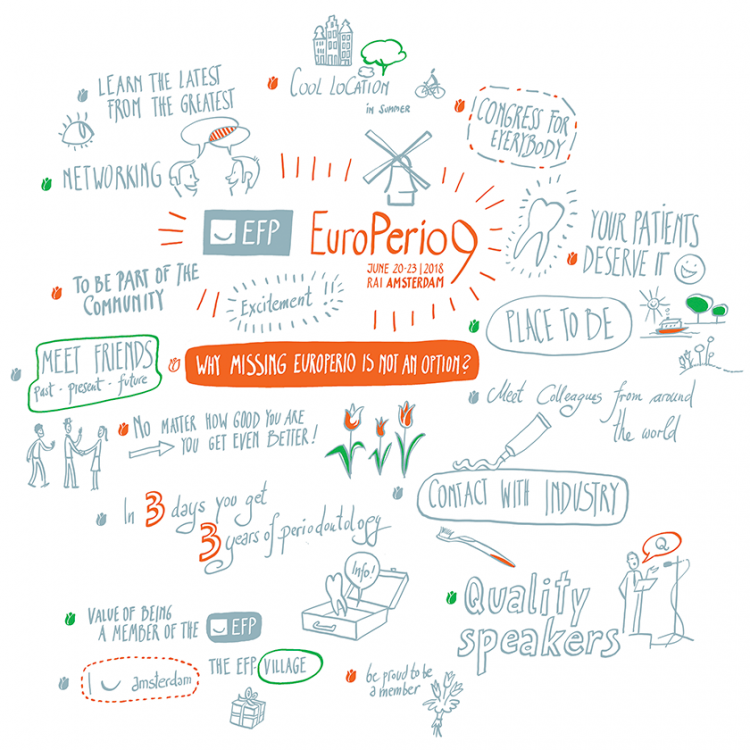